Johnson went from bull rider/prison guard to a country music star who eventually sold 350,000 hard tickets to his shows in one calendar year.

Johnson was the first independent artist to sell out the Houston Rodeo at NRG stadium, selling over 75,000 tickets.

Johnson’s latest album “Ain’t Nothin’ to It” released this year, charted at number one on the Billboard’s country charts. Billboard declared, “Cody Johnson is the real thing.”

Johnson who has over 2 million monthly listeners on Spotify will be playing on an outdoor stage backlit by the beautiful Fort Worth Skyline, which will make for an unforgettable experience.”

So come out and join the CoJo Nation this Saturday night… this is one you don’t want to miss.” 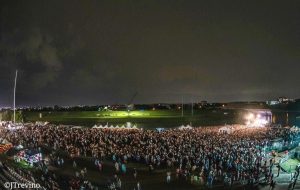